I am not a morning person. Anyone who has worked with me, has grown up with me, or has dated me, knows this. I am the person who sets 20 alarms in the morning, just to eventually wake up at the last possible minute. Coffee is my best friend, and going without it in the morning causes me to be more troll than man.

However, there is one thing that can always get me up. Soccer. Every weekend, I get up around 6 am and make myself breakfast, coffee, and I tune into the weeks English Premier League soccer matches. This is the one day that waking up is not a struggle. I look forward to it. Being an American soccer fan is a unique experience, as unlike every other country in the world, soccer is not really seen as a mainstream sport. Because of this, soccer fans have a very different experience than other sports fans.

At this point, you might be asking why am I telling you this?

Well, as a marketer, I have the utmost respect for how soccer teams have to market themselves, especially in the United States. I also want to share with you, my insight into their success.

The first place that American soccer is succeeding is identifying their audiences.

As of 2014, there are two major groups that are most passionate about soccer.  Young adults aged 18-29, and Hispanics. Let’s start with the young adults. In this demographic, football is still the most popular sport. However, soccer has risen sharply over the last 20 years and now ranked second in popularity among this group. On top of this, soccer fans are also much younger than their competitors. The average age of a soccer fan is just 37. This is a stark difference in comparison to football fans at 46, and baseball at 53. When we look at the Hispanic population, the numbers are also quite dramatic. In 2015, there were 56.6 million Hispanics living in the US. Within that group, Twenty-six percent say that soccer is their favorite sport to watch. When you pair these two groups together, you find that the soccer market within the US is dramatically different than those of the traditional sports.
Now, we get to the fun stuff.

How did the US Soccer National Teams, reach their audiences?

For the 2014 World Cup and 2015 Women’s World Cup, US Soccer made sure that their brand could be 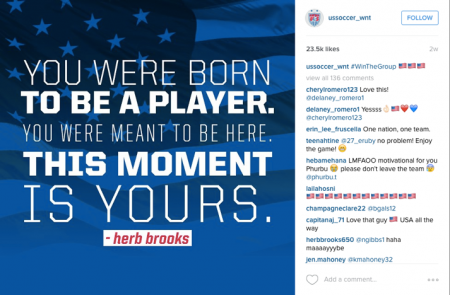 identified visually from the rest of the crowd. Big news outlets, fans, and other soccer federations are all going to be posting at the same time, on the same subject matter, and utilizing many of the same imagery. Simply posting a player photo wasn’t going to be enough, as that would simply contribute to the noise. Instead, US Soccer spent months before the tournament developing and stockpiling thousands of pieces of content. This content covered virtually every imaginable event that the team would face, allowing them to always be the first to post online. They also crafted and clearly stuck to a visual identity for this content. Their design team focused on a blend of bold and thin font usage, bold colored overlays, and a strict use of their color scheme. These elements allowed fans to visually identify the content as a US Soccer post from the others.

Secondly, they made sure to take the conversations that happened post game and took ownership of them online.

Fueling these storylines would eventually lead to more television viewership. They made sure to tell each player’s story in short form videos, allowing fans who are a bit newer to the team to find players they identify with. Fans could form a bond with someone because they have similar backgrounds as them, lived in the same city as them, or that had charismatic personalities that they wanted or respected. They helped make their players more personable and approachable, not simply, unrelatable superstars. 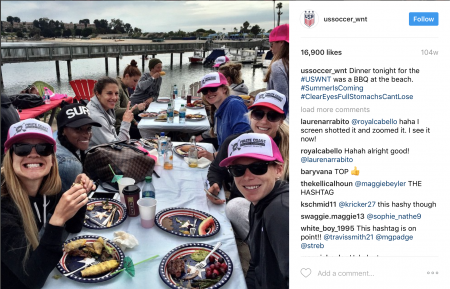 This was followed on other networks with behind the scenes snapshots of the team. Seeing them recover from the games, have meals together, skyping with their families, and simply enjoying each other’s company with a team selfie, allowed fans to follow them in a light that other outlets didn’t have. It is easier for any fan to connect and identify with an athlete if they do the same things or act in the same manner during their free time. This was Just another way that they are trying to connect their athletes with fans and build emotional connections to them.

They also captured the nation’s growing love for these teams, as they started to become a part of the national conversation. Celebrities, Professional Sports Teams, Social Influencers, and even the president started posting their support on social media. This trickled down to the average fans, who transformed this simple act of support into a social media movement. It made you a part of something online, which gave you another reason to tune into the games. It was the fun, hip, cool, in the know thing to do. No matter what outlet you chose to support, US Soccer was there interacting with them. Facebook, Twitter, Vine, Instagram, Youtube, Tumblr, Snapchat, etc. All were vehicles used by this brand to build relationships with their supporters.

At the end of the day, however, we need to know if this translated into results.

While getting tons of likes and impressions is great, what US Soccer really needed out of this event was TV ratings. It’s these ratings that dictate their income stream from advertisers. Without this, no amount of engagement could be claimed as a success. After the dust settled, the TV numbers were staggering. In 2014, the men’s team drew a record high 25 million viewers on the English and Spanish language broadcasts. This was a 20% increase from the last world cup high in 2010. In comparison, the 2013 World Series that year drew 14.9 million viewers, and the NBA Finals drew 15.5 million on average.

Following their same strategy, they were able to draw 25.4 million fans for the Final vs Japan. The previous all-time record was during 1999 final which saw 17.9 Million. Needless to say, their approach to this tournament set new highs for their organizations.

Was this solely to do with their social media marketing plans?

A combination of factors leads to these results. A rare worldwide event that allows you to celebrate your national pride is always going to have a spike in interest. But where US Soccer shined, was how they nurtured the passion and provided fans outlets to express it. That is something we can all take and accomplish in our own work.

Your raving fan is out there, but are you fostering their passion into results?

As a digital marketing agency Timmermann Group strives to make personalized connections between brands and consumers to increase recognition, relatability, and retention. Our process– including developing a strategy, producing a new website design or digital content to communicate who you are and what you do, amplifying the traffic, and reporting back on the results through analytics- is necessary to get your team on the road to winning the World Cup.

Feel free to reach out to us if you need coaching to help strategize your branding process. We can get you to the big win!